skip to main | skip to sidebar

Pakistan’s “third sex” is to be officially surveyed and registered under the direction of the Supreme Court.

In June 2009, Chief Justice Iftikhar Chaudhry ordered the establishment of a commission to conduct the survey after a prominent jurist, Mohammed Aslam Khaki, filed a petition drawing attention to the plight of Pakistan’s several hundred thousand eunuchs.

Until the registration takes place, the number of eunuchs is unknown. Community leaders estimate it is at least 400,000.

For the original article, click this link.
Posted by Jim Beaux at 06:31 No comments:

Shortly after my first unsuccessful attempt to take advantage of the new, less stringent regulations regarding changing gender markers on drivers licenses in New Jersey, I met with a gender specialist to get the form signed, certifying that though born biologically male, my gender identity is in fact female.

While certainly an easing of the previous regulations, which required proof of genital surgery, these new regulations eliminate that requirement but still require the signature of a licensed gender specialist.

Of course, having lived fulltime as a woman for over 12 years, the doctor knew just after a few minutes of talking to me that I was for real and not only signed the form for me, but also gave me something I've never had (or really thought I needed before), a "carry letter," a letter from the gender pro on official stationary which you show to cops/officials to prove that you're a bona fide transsexual.

All together including gas, just getting this form signed cost me just over $500, almost two entire week's worth of unemployment payments. I was damn lucky the doctor was willing to take payments over 3 months (apparently this is a common issue in her practice) or I don't know how I'd have survived until my next unemployment check.

Full story at this link.
Posted by Jim Beaux at 16:41 No comments: 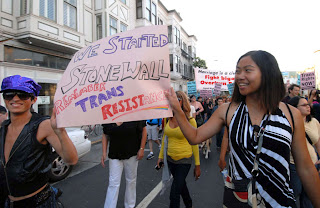 "Several thousand people gathered in Dolores Park to demand equality for the Trans Community. This was followed by a spirited march to 26th and Valencia. The march was the 5th trans march in San Francisco that began in 2004 to honor Gwen Araujo, a young transgendered woman who was brutally murdered in Newark California in November of 2002."

To view all of the photos by Bill Hackwell, please click on this link.
Posted by Jim Beaux at 15:33 No comments:

An earlier report on Calderdale flagged the need to identify the number of people with gender dysphoria in the area.

Calderdale is a local authority area in West Yorkshire that includes Halifax. The area has a population of about 200,000.

NHS Calderdale carried out a survey to identify the number and satisfaction with service and reported in Mar 2009.

The survey used trans as a term for those who had used, were using or intended to use, the gender dysphoria treatment services.

The survey found the prevalence to be 1 in 5,000 approximately.

However, the report noted a marked lack of people who had ceased using the services and a similar lack of those who intended to but were not already in the system. It also noted evidence that the survey had not reached all trans people in the area, due to some people choosing to not flag their background, and due to a fragmented support network. The latter is despite the work of Trans Yorkshire, a group of about 10 tackling trans issues in Calderdale.

For these reasons, the report concluded the true prevalence is likely to be more frequent than 1 in 5,000. NB The Transgender EuroStudy report had a prevalence of 1 in 4,000.

The report found a trans-woman to trans-man ratio of 4:1.

The respondents noted Calderdale as a fairly nice and humane place to live.

Nearly everyone surveyed had either gone through SRS or intended to do so.

Only a third of respondents felt their current health needs were being met.

A notable characteristic was the use of a mix of NHS and private services. The report details treatment available on the NHS and that frequently sought, but not provided.

The treatment of adolescents was also flagged as a concern.

A majority of those responding had been or were using services provided by Leeds Gender Identity Clinic.


In April 2009, the trans community in Yorkshire was organising letters to be sent to all 37 MPs for the region, complaining about the services offered by the Gender Identity Service at Leeds. The aim was to meet with the MPs in parliament on 19th May to discuss these complaints. It appears that Calderdale is the only area in Yorkshire where patients can choose which gender identity clinic they wish to be referred to.

More on complaints re Leeds GIC
Posted by Jim Beaux at 09:16 No comments:

In June 2009, the Gender Identity Research and Education Society published a report on the prevalence, incidence and geographic distribution of people seeking treatment for gender dysphoria within the UK.

The GIRES report is intended to provide healthcare, police services and employers with information on the numbers of people in pertinent groups within the transgender spectrum in the UK.

The report is drawn from 3 recent surveys in the UK and Europe, plus additional material.

The total number of people who have presented for treatment for gender dysphoria in the UK is calculated to be 10,000, with 6,000 having undergone transition.

The number of new people presenting for treatment each year is growing at 15% compound. This would double the number every 5 years.

The authors of the report suggest this is due to more social acceptance and the growth of ‘buddy’ support.

This increase is similar to the increase in Europe.

Trans people present for treatment at any age but the median age in the UK is 42.

Evidence from Europe and some from the UK suggests the female-to-male number could increase until it matches the mtf number. If this is the case, the total presenting for treatment could rise to 90,000.

The number of children and adolescents presenting for treatment each year is 84. This is also doubling every 5 years. The authors suggest that if youth treatment was brought into line with best international practice, the rate would increase faster, since a number of people in this category are known to seek treatment abroad.

A total of 1,200 people actually transition each year. Based on rates of those currently seeking surgery, this equates to a need for 480 genital and gonadal operations for mtf trans people and 240 chest reconstructions for ftm trans people.

It was found that the geographic distribution of those presenting for treatment does not show any clear correlation with population density, but that geographic distribution is very uneven within the UK. Areas such as the West Midlands and Merseyside have high population densities but low incidence. The authors speculate that this may be due to cultural factors and whether or not support networks are available.

GIRES report in full.
Posted by Jim Beaux at 03:28 No comments:

Part of the resolution reads -

1. To condemn acts of violence and related human rights violations
committed against individuals because of their sexual orientation and
gender identity.

2. To urge states to ensure that acts of violence and human rights
violations committed against individuals because of sexual orientation
and gender identity are investigated and their perpetrators brought to
justice.

3. To urge states to ensure adequate protection for human rights
defenders who work on the issue of acts of violence and human rights
violations committed against individuals because of sexual orientation
and gender identity.

Click here for full resolution and story in detail.
Posted by Jim Beaux at 08:36 No comments:

The software works by mapping facial features for about 30 key expressions (e.g. smiling, frowning) and translating these into the equivalent for a different face. Similarly the voice can be altered e.g. from male to female. The software works quickly enough to re-map video conversations in real time, in both directions.

Using the software, researchers at three US universities found that in such conversations, body language was more important than gender.

The results are to be published in the Journal of Experimental Psychology.

The researchers intend to use the software next to compare the relative importance of race and gender.
Posted by Jim Beaux at 03:04 No comments: